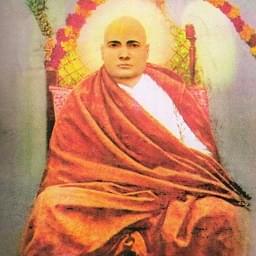 150 years earlier, the Chhapra town in Bihar was entirely different from today as there were hardly any means of communication were available and the population was not so dense as today and India was ruled as Britishers.

On the holy day of Chaitra Sukla, Ramnavami,the wife of Shri Tulsiram Ji Pathak gave birth to a son who was named as Ramyaad.Lala Narhari Prasad Shrivastav was one of the Yajman's of Tulsiram Pathak and also one of his very close friends. Shri Narhari Prasad was a Mukthar by profession and similar to Tulsiram was a follower of Kuldharm. He also had a son who had unfortunately died one month before Ramyaad's mother had expired. Now between two families the responsibility of taking care of motherless child Ramyaad was taken up by Shri Narhari Prasad's childless wife was taken up by as his own child and started taking care in best possible ways.

Shri Narhari Prasad arranged for getting Ramyaad educated since the age of four only. Munshi Devi Prasad was appointed as his teacher who ensured that Ramyaad had good Knowledge of Arabic and Pharisee which were the prominent languages of that time. Because of the religious nature of Shri Narhari Prasad , Ramyaad got exposed to the frequent satsangs which used to happen periodically at his house and which created a great impact on his mind. At the age of five, his father Shri Tulsiram ji passed away.

In those days there used to live in Kedarghat near Varanasi, a very famous saint Paramhans Shri Swamijee. He used to visit Chapara for satsangs as he had lot of followers there. Once Swamijee had visited Shri Narhari Prasad's home where he gave Diksha to Ramyaad and taught him about Brahma Vidya and explained him to practice bhajan.Shri Narhari Prasad died when Ramyaad was only eleven.Now he was left only with his dharma mother Shri Narhari Prashad's wife.

His devotion towards his Guru and an instance desire of understanding Brahma started getting stronger in Ramyaad's mind and heart. As a result he started devoting more and more time to meditation and bhajan and it gradually started making him disappointed towards material world.

As he was the only rightful successor of the both families he could have very well enjoyed the wealth of the families to lead a very good material life. But he had no inclination towards seeking material pleasures of worldly life. By now he had made up his mind to renounce this material world but he had not disclosed this to anyone. When Swamijee arrived in Chhapra after sometime, Ramyaad expressed his inner desire to him. He however advised him initially to lead a normal Grihasta life while doing bhajan and dhyan.But Ramyaad's spiritual desire was to strong to be convinced. Finally after a lot of discussions, Swamijee initiated him into Sanyas and Ramyaad was renamed as Mahatma Adwaitanand, But he instructed him to stay in Chhapra as long as Shri Narhari Prasad's wife was alive.When he was 17,she passed away.

At very young age after renouncing this material world and the wealth of his traditional family, Mahatma Adwaitanand ji arrived at Buxar in only a Langoti.From Buxar he moved to a place Nauhatta and started moving like a vagabond(Yayawar). Because of his extremely kind nature, people started calling him as Dayaluji. After Nauhatta he disowned even his Langoti and started roaming in complete Digambara state.

On his way when he was moving in a forest area near Tilauthu in Dehri he came across an extremely illuminating light which was supposedly coming from a Sarpmani. Moving ahead he reached Akbarpur which was a thickly dense jungle area inhabited by Deers, Rabbits and many dangerous animals. He had neither any clothes on his body nor he used to carry anything even for drinking water. He used to survive only on fruits and didn't stayed at any one place for long and hardly used to speak those days. A police inspector Shri Balmukund Singh came into his contact there and he did his best to take care of Dayal ji, who stayed at his place for six years. From there he went to Dumraon and stayed there for three months.

Not he made up his mind not to stay for more than three days in any place. He went on to place like Gajrajgunj, Brahmapur, Shahpur, Bespur, Vilauti, Ara, Bihta, Khagaul, Danapur, Bankipur, Lodikatra and other location before reaching Patna. He had spent almost four years in these places. At that time he used keep Maun Vrata also.

After roaming around in places like Baliya, Ghazipur, Saran and Champaran at the bank of Ganges, He reached Bettiah. During his visits in these places he met many different Saints and Fakirs from whom he learned a lot of secrets of Brahma Vidya. In Bettiah he was welcomed by the King and the Queen.

It had been sixteen years since he had left Chhapra. Now purely on his intuition he decided to go Kathiyawad and Dwarika. From there he moved to Mathura and Vrindavan. In Mathura Paramhans Dayal ji a saint whose proximity helped him to realize awareness of highest levels and experienced an inner which he had not felt till date. After spending some time here, he went on to places like Jaipur, Sambhar, Devdani, Ajmer and Puskar before returning to Mathura. However he couldn't meet the same Saint.

There were many interesting stories relating him while he was roaming around.

Once while Dayalji was staying at a Bhakt's place, a Fakir also came there and asked for food. After being provided the food the the Fakir also asked for the Lota in which water was provided to him by a child. When the child refused to part with the Lota, the Fakir threatened that he will use his Yogic Siddhi to eliminate him. The kid got frightened and told Dayalji about it. He said to Fakir to try his power who was not able to anything even after lot of efforts. Now Dayalji said that he is going to use his power against him. The Fakir realized that he is against a Brahmagyani saint and asked for forgiveness.

Once in Jaipur another Fakir met him and told that he can convert anyone into an animal with his siddhi. Dayalji asked him to try his power. He tried it on one of his followers but nothing happened. However after sometime the same Fakir crashed his head with iron pillar. Dayalji asked him not to use his siddhi negatively and forgive him.

When King of Jaipur arrived to meet him, He spread a red Pawra (a piece of cloth ) to welcome him, however the king refused to walk over it and instead came barefoot and requested Paramhans Dayalji to allow him to construct an ashram in Jaipur which he refused.The King said --- Aap jaisa aapko hi paya.

By now he had become well known and respected in spiritual circles. When Dayanand Sarswati met Paramhans Dayalji in Jaipur he was told ---Whatever nature wanted to get it done by you has been accomplished. Hearing this Dayanand Sarswati Ji returned back to Jodhpur without even meeting the King of Jaipur

A clerk in Salt department Shri Bhagwan das ji Diwan met him When Shri Dayal was in Sambhar and expressed his desire that he wanted promotion in his department as an Inspector. Paramhans Dayal Ji said --- Forget the post of Inspector, You will go on to become Superintendent. Nature has to obey the sayings of Brahmagyani saint. Shri Diwanji was made Superintendent after some time.

In 1889, Sri Bhagwan Das Ji requested Dayal Ji to visit his native place in Teri at the border of India. Shri Dayal Ji accepted his requested and stayed at Teri rest of his life.

A small ashram was established in Teri. After sometime thousands of people started visiting this ashram to see Dayal ji and to listen profound satsang disseminated by him. In no time he had become immensely popular in this border area. Nawab of Teri also came into his contact and deployed his four constables in Dayal Ji's security. He often used to visit Teri ashram along with his family members.

He was rightly named as Adwaitanand by his Guru as noone else could have explained the philosophy of Sankaracharya's Adwait Vedanta as he used to do. In his own words he has so beautifully propounded the Adwit stage of Vedanta Darshan.-

Shri Paramhans Dayal Ji had now reached 73 years of age and was not keeping well for last two years. He called a closed bhakt Ramchandra Ji and asked him to ask whatever he wanted. Ramchandra Ji enquired about his health. Dayal Ji replied - Now my time has come to go. I will now survive only on water as everyone has to die one day.

The ashram system for sanyasis in recent times was propagated by him only. As per him a sanyasi should not ask for alms. A sanyasi is supposed to live a self dependent life of discipline without any pretensions. Though a sanyasi lives in this material world he is beyond the Maya and Vasna of day to day life. As he is a blessing for mankind, his life is inspirational for all.