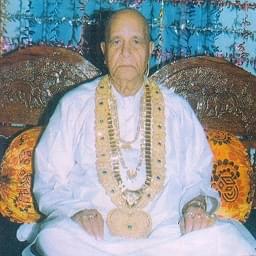 Of all the things created by Brahma, Human body is the most supreme creation.

When nothing was there, Truth existed.

its possible to realize the truth again in this lifetime and Bhakti is the best possible way to realize it. Great people who have been able to attain this and manifested them in the form of Guru time and again are a blessing for the mankind.

Kharguja village in Chandauii district near Varanasi was the fortunate place where a rarest of rare Shri Swamijee was born as Devshankar to his parents .

Devshankar‘s father Shri Ram Ugrah Tiwari and mother Smt Morvanshi Devi were from a very traditional and religious and the spiritual inciinations of Devshankar were apparent since chiidhood only. in the same village ,lived a very reputed gentalman Thakur Vaikunth Nath Singh who was an extremeiy religious Person and whose maternal nephew had become a sanyasi and was disciple of very famous Sant of Puniab Shri Swami Swarupanand Ji Maharaj Swami Swarupanand Ji happened to visit once Kharguja for two days .During that period , incidentally Thakur Vaikunthnath singh had gone out of his village .During this stay of two days many people of Kharguja became disciple of Swarupanand ji Devshankar whose age was around 17 -18 at that time was also one of them who took Guru Diksha from Swamijee.

Devshankar grew very close with Thakur Vaikunthnath Singh who already had become a disciple of swamijee and later on after one and a half years went on to become a full fledged sanyasi and subsequently as Swami AtmaViveka Nand ji (to be referred as Shri Maharah from here on) .Now Devshankar became a devoted shisya of Shri Maharaj and helped him in establishing Garhwa ghat ashram in Varanasi .He also used to visit Punjab to meet Swami Swarupanand ji and after 3-4 years of becoming disciple entered into sanyas himself and was renamed as Mahatma Shivadharmanand ji. ln the able direction of Shri Maharaj he started visiting different places , taking care of various ashrams, meeting people and conducting Satsang very passionately .

As his teachings during satsangs on Ramayan ,Gita, Vedanta, Yog and Sankhya used to be based on his personal experiences , he became immensely popular and as result thousands of people in Eastern UP and Western Bihar became followers of Garhwa ghat Ashram. Once he narrated a very heart touching incident about Thakur Nawab Singh who was father of Shri Atmavivekanand ji and who was extremely sad after his son became a Mahatma.When He was in his last stages and being treated he asked Shivdharmanand ji as to why he is being treated as he had died on the same day when his son became a sanyasi .Post his death he went to meet Shri Maharaj who was meditating in a cave and as soon as Swamijee reached there he asked whether the old man has died .After being confirmed, he said that Nawab Singh was deeply in love with him and now he has released his soul .This shows the level of intimacy observed between these two great men.

Shivadharmand Ji used to attend to all the personal needs of Shri Maharaj. Once he had hit his head with one of the protruded structures of the building and was hurt as blood was coming out. He fastened his head with towel and went on to carry water to Shri Maharaj, who when realizing what had happened , ordered all the similar protruding structures in Ashram to be dismantled immediately and got him treated with great love and concern.

As mentioned earlier Mahatma ji was extremely popular on account of his great knowledge and passionate style of oration during satsangs even among his fellow Mahatma's. Once a dispute arose in Chakauri ashram (Punjab ) between the local resident Sikh's and the Mahatma's in ashram as one of the local resident Eshawari Singh had shown his inclination to become sanyasi and get attached to the Ashram of Garhwa Darbar,As the local Sikh's were very upset the situation had become extremely volatile. Swamijee was sent by Shri Maharaj to resolve this to Punjab. He went on to meet them alone and started discourse on Guru Granth Saheb only quoting :

The knot lying between Jad(Avidya) and Chetan(Vidya) is only known as Granthi and whoever opens it is known as Guru Granth .

He went on with his discourse for hours passionately and the people got carried away with the flow and were now full of devotion and love for him as the enmity has forgotten. They started reciting Wahe Guru and Satt Shri Akal frequently and and requested him to stay for some more period. Now Mahatama Shivadharmanand ji was fully occupied with taking care of Garhwa Ghat ashram as Shree Maharaj was not keeping well .As the Doctors suggested a place in city nearer to Varanasi he moved Shree Maharajji to a place now known as ‘Kali Mahal'.Now he had become the main pillar of the all Bhakti related movements of Ashram. As Shree Maharaj had entered into his last stages on account of not he had already started discussing the future course of directions for Asharam in his absence. Normally its seen that the most favorite shisya is kept away during the last stages of Guru as it might become unbearable for him to oversee the demise of his most loved one. Mahatma Shivadharmanand ji was also sent to some other place for discourse. Sometime in 1949, he was visiting ‘Kopwan kuti' near Gazipur which has close relationship with 'Chhotka Rajpur' village in Buxar On account of marriages happening

Other disciples like Raja Singh ,Bhuneshwar Singh ,Paras Singh escorted Swamijee to Rajpur with love and devotion. For the initial three months Swamijee stayed at Raja Singh's house and conducted Satsang there only .Then a plot of 10 kathha was donated to him by his followers for starting the Ashram in Rajpur. Swamijee did the shilanyas of Bramha Vidyalaya and Ashram' on this plot. After sometime a 'Mandap' big enough for accommodating 50-60 people, was made on an elevated platform for Swamijee to give his discourse. Swamijee himself has appreciated the place many a times. Slowly the ashram started getting bigger as the number of disciples increased over a period of time and to get them accommodated natives of Rajpur were more than willing to donate land to the ashram. Many followers of Garhwa ghat ashram Rajpur now to gain from the satsang dhara. As numerous disciples took diksha and many of them took sanyas and carried the teachings of swamijee, the fame of Rajpur Darbar spread far and away.

The salvation of Shri Paras Singh of Chotka Rajpur

The house from which maximum people became disciple in Garhwa ghaat is known as Baba's house and it belonged to one of the main bhakt's Govind Singh. Paras Singh also belonged to this house. When Swamijee was taken to Baliya from Kopawan in Gharhwa Ghaat, Paras singh was one of the persons carrying Swami Ji's Palki. He used to work in Calcutta and after retirement , used to stay with his daughter in 'Rasra'.ln the same house there arose a dispute ln the family of Bachha Lal singh and they requested Swamijee to be a judge and sort it .He said that the oldest member of the family should be the judge and advised about Paras Singh. On being said that he is too old to come, Swamijee asked him to be carried in Ashram in a Palki. ln fact Swamijee wanted to grant 'Mukti' to one of his favourite Bhakt's. lt was an interesting coincidence that current Sarkar who was still to attain sanyas, was present there and had prepared Khokhri , Baati and Daal Haandi for Swamijee. After Swamijee had his lunch the residual Prasad of Baati, Daal and Chokha was given to Paras Singh .It was his last supper. Around 4 pm in afternoon Paras Singh was sitting in front of Swamijee besides a wall. His other family members Kamal Singh. Ajit Singh and Shivji Singh were apprising Swamijee regarding the dispute. At this instant Paras Singh while looking at Swamije closed his eyes for ever. Nirmal Singh who was sitting beside him asked Swamijee as to what happened to Paras Singh. Swamijee asked the body to be taken down and said to current Sarkar that Paras Singh was very dear to him and was instrumental in bringing him from Kopawan. Swamijee further elaborated that this is one of the best possible way to pass away . This incident was something which happened similarly in Ramayan when Baali and Jataayu had died before Ram. It shows that if God is happy , he grants wishes in an instant to his Bhakt's which is difficult even for Yogi's who have been meditating for years. Every year Swamijee used to visit different branches of ashrams associated with Rajpur and Garhwa Ghat .Branches in places like Atsar, Nandana, Bhiti which were earlier associated with Garhwaghat now came into more close contact with Rajpur Darbar. Yearly visit of Swamijee to any of the branch ashrams was an event most eagerly awaited by the followers with huge anticipation, hope and celebrations. Many old, sick and handicapped persons who were not able to travel to Rajpur got opportunity to see Swamijee at these branches.

Similar to this shloka from Gita there were all possible type of followers in asharam.

With Swamijee's blessings people got what they wished for whether it was money or fame or son or anything else. But there also were rare followers who used to come purely in pursuit of knowledge and Rajpur darbar was the ideal place where there quest ended with Swamijee.

Approximately 200 followers took to sanyas from Swamijee - most of them are now no more , however around 50 of them are still continuing to enlighten people in different places like Eatern UP, Western Bihar, Orissa , Jharkhand, Bengal, Rajasthan and Lucknow.

Saguna Bramha Shri Swamijee maharaj decided to become Bramhaleen on 20 th March 1999 and was given Samadhi in Rajpur ashram itself .lts still difficult to believe that he is no more. However, on 23rd April, a grand Bhandara was held in which at least 50000 people participated and ate Maha prasad.

As is the precedent with all the great Guru's, Swamijee also had indicated during his lifetime about his rightful successor Mahatma Satyanand ji , who would carry on the great tradition of Guru Shishya parampara while spreading Dharma and Bhakti.