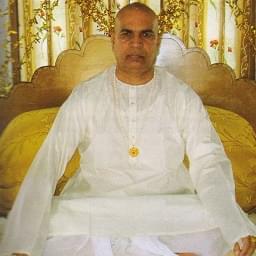 Param Vairagi, having complete knowledge of Physics and Metaphysics and a person with multiple dimensions, belonging to a traditional kshatriya family, current Swami Sharkar Shri Satyanandji's birth place is Chandauli village in Siwan district. His father was Shri Punyadev Singh and Mother was Smt. Kaushalya Devi. He was named as Ramji by his Kulguru during the naming ceremony. His mother was a lady of high religious nature who used to visit different pilgrimages sites in places like Kashi, Prayag, Buxar, Dadari etc. She performed the Mundan sanskar of swamiji at Dadari, besides the scared bank of Ganges at the age of five. It's a strange coincidence of nature that his initial naming ceremony and last mundan sanskar while becoming sanyasi, were both done at opposite banks of Ganges.

He always used to listen the stories of famous saints and characters from Ramayana, recounted by his mother frequently. Once his mother has told him about the privilege of meeting famous saint Shri Devrahwa Baba in Kashi and since then it was his wish also to see him which got realized years later. From him only, he had got the mantra of Ohm Namoh Bhagwate Vasudevay Swaha.

On account of being religious since his childhood days he frequently used to visit Khaki Baba's Mathiya which was nearby his house. He met lot of contemporary saints like Damarua Baba, Paihari Baba, Mauni Baba, Khaparia Baba and Shri Ramanujacharya ji during his young days while staying at his birthplace. One of his school teachers Pandit Ram Sharan Mishra who was very fond of Ramayana, inspired him to memorize the whole Ramayana at the young age of school days.

He always stood first in his class. After passing matriculation in first class he moved on to complete his graduation in Physics (Hons) from the prestigious Langat Singh College in Muzaffarpur. Then he went on to Magadh university to finish his post graduation in Physics and after completing it, got appointed as a lecturer at a young age of 24 in SNS college, Tekari. He has been known to be very knowledgeable, dedicated and versatile teacher apart from being a very sociable person.

While doing PhD under his guide Dr. Amarnath Singh, He came across a photograph at his house, of Shri Swami Shivdharmanand Ji Maharaj. Dr. Amarnath Singh had just got dikshit from Swamijee four months back. His immediate neighbor Dr. Yagual Kishore Mishra, an old disciple of Rajpur Darbar for last 12 years, was instrumental in initiating him to Diksha. After seeing the photograph of Swamijee, he inquired about him and after getting the requisite information, went to Rajpur next day and had opportunity to meet Swamijee. As soon as he saw him he felt awakened and it was as if he had met someone for whom he has been looking for ages, birth after birth. After staying in Rajpur ashram for four days, he got dikshit and started to discipline himself passionately as per the teachings of the Swamijee. Being a bachelor helped him to realize his goals easily while meditating and practicing Bhajan. Gradually he started to feel like going in Guru's shelter completely and expressed his wish one day, to Swamijee who quoted a couplet after knowing his desire:

He had got the answer he was wishing for, and was too happy for it. From the day he submerged himself fervently in Guru Bhakti. Meanwhile, based on Guru's instruction he had started conducting regular satsangs in Tekari and its neighboring areas. His profound knowledge, excellent oration skills and Eknistha dedication towards Guru resulted in creating a huge mass of people in and around Tekari, getting immersed in Bhakti Dhara. This movement resulted as a base for getting Tekari Ashram constructed by local resident bhakts in no time after getting instructions from Swamijee.

By this time the desire for becoming sanyasi had become deep rooted and was getting stronger day by day. As he had good opportunity of being in close proximity of Mahatma Darshananand Ji for last couple of years, He expressed his desire to him. Mahatma Darshananand Ji advised him to have patience and told that it will be indicated only by Swamijee.

It was possible only for a devoted and dedicated person like him to be able to manage diligently the dual responsibility of being a professor of physics and at the same time managing the Bhakti Dharma of metaphysics by also teaching Yoga and Vedanta. In no time, he had become immensely popular among all the followers of Rajpur Ashram and with the blessings of Swamijee, it had started appearing imminent that he might be the person who will ensure the Saguna Bhakti Dhara in times to come.

By this time the health of Mahatma Darshananand Ji who was not keeping well of late, and who was accountable for all the administrative responsibilitiesof Rajpur and other branches, deteriorated and finally on 01 March 1998 he passed away. It created a huge void as he was the towering personality. As programmed now Swamijee instructed him to resign from job and delegate the responsibility of Tekari ashram to Shambhu Nath Pathak who later went on to become our famous Mahatma Vyashanand Ji. After receiving the instruction he went immediately to Rajpur and on 10 April 1998, incidentally also Good Friday, he was initiated into Sanyas by Swamijee himself and was named as Mahatma Satyanand Ji. Swamijee not only delegated to him all the responsibilities of Mahatma Darshananand Ji, but also registered him officially, in Buxar registry office, as the true successor who will be accountable for all the future responsibilities of Rajpur Ashram. As has been the precedent traditionally, once the true successor is identified, Guru starts getting ready for Mahaprayan.

Swamijee donated his personal Omega watch to him instructed Mahatma Namsatyanand Ji to get his dinner cooked alongwith him. He was too embarrassed to know this and expressed it Swamijee that he would prefer to have it cooked in the general bhandara. The intimacy was an indication of future. Swamijee had entered into last phases of his role here. He instructed now to make more and more Tyagis and also indicated the region suitable for it.

Momentum of Bhakti Dahara now had become fast and started moving at a great pace. Land was registered for Patna Ashram, new construction was done in Pakur and new building got constructed in Calcutta with Swamijee's instructions. Finally the most unfortunate moment arrived when on 20 March 1999, Swamijee became Brahmleen in Varanasi ashram.

At that time Mahatma Satyanand Ji was in the Aara at Shri Ram Singh's place. Normally it has been a tradition that most beloved shisya is kept away from the place of demise of Guru. Vivekanand was busy in satsang somewhere else when Ram Krishna Paramhans passed away. Similarly Shri Swarupanand Ji and Shri Aatmavivekanand Ji where in different places at the time of their Guru's Mahaprayan. Even at the death of Shri Maharaj Ji our own Swamijee was in different place. After being informed of Swamijee's demise, he came immediately to Rajpur and performed the last rites of Samadhi with full honor and devotion. Its no coincidence that the place of Swamijee's Samadhi and his room on the third floor are just opposite and it creates a unique feeling. This also showed the refined and matured thought process of Mahatma Satyanand Ji. After one month the grand bhandara was arranged in his able direction in which more than 50,000 people had Mahaprasad.

On the next day of Bhandara, a meeting of all the Mahatmas was organized where everyone agreed unconditionally as per Swamijee's indication to let him takeover all the responsibilities of Rajpur Darbar. Current Swamijee Shri Satyanand Ji Maharaj identified construction of Samadhi as his first big responsibility after taking over. This was reflective of his devotion towards his Guru. On the next Guru Purnima as per the traditions the ritual of of Chadar Mahanti was performed where the Aarti was done by senior-most Mahatma Vishnanand Ji, and Mahatma Chidambaranand Ji put the Chadar on Swamijee and he was appointed as Gaddinashin Guru. Mahatma Alakhgayanannd Ji performed Aarti again in the evening in front all the Mahatmas and Bhakts in the ashram.

Swamijee's able guidance and his multidimensional personality has provided a new impetus to the growth of ashram in all possible directions. The logical analysis of Yog, Vigyan, Sankhya and Vedanta based on personally realized experiences which was possible only from Brahmleen Shri Swamijee, gets continued with current Swamijee. Its simply not possible to get it anywhere else.

They all are blessed who have been fortunate enough to come into contact with Swamijee and have been able to listen to his valuable satsang.